I’ve said I would get a full cake of this once I’ve accomplished a major life goal. I haven’t yet, but it never stops motivating me. This tea proves that cakes with Zhongcha wrappers come in all different varieties. I’ve had another yellow mark private order (from teas we like) that’s completely different in material and storage. The white2tea little yellow mark is an all-around powerhouse. It’s got honey sweetness, deep fresh woodiness, and everything in between. High notes, low notes, it’s just deeply satisfying. It’s one of those teas you have to stop and appreciate for it’s yun and its balance. I would consider it the standard by which I compare aged raw puer.

Other reviews of this tea: http://jakubtomek.blogspot.com/2015/01/2002-little-yellow-mark-white2tea.html 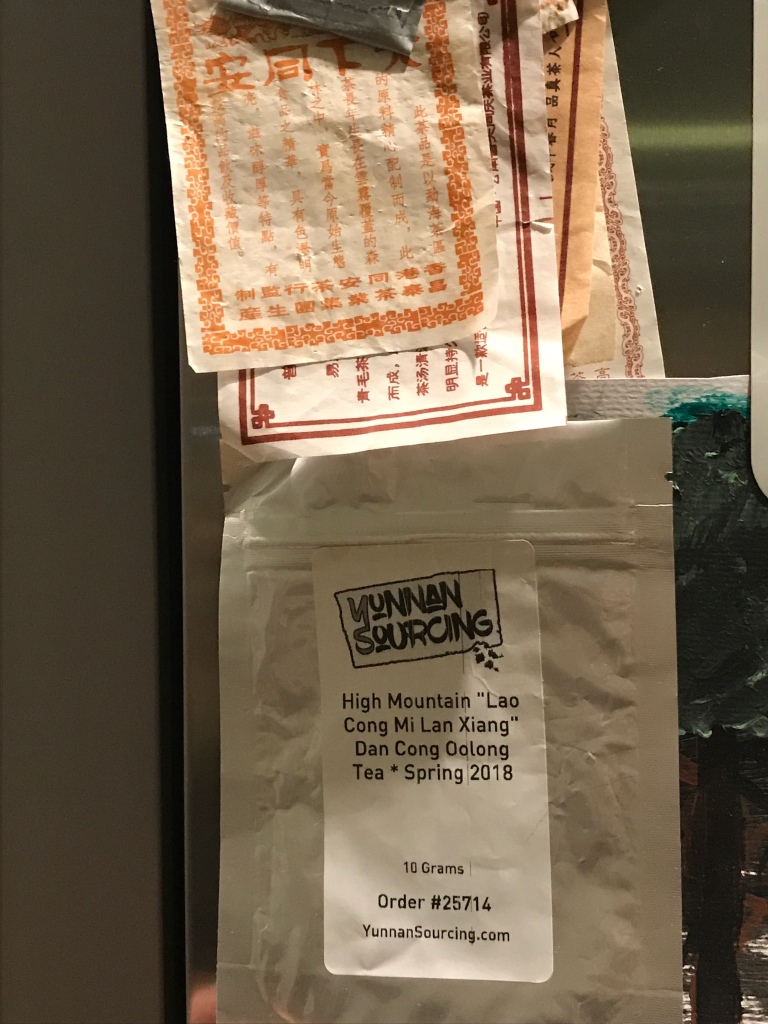 In regards to tea, I go by this maxim: the deeper, the better. Mi Lan Xiang means Honey Orchid aroma/flavor, but they do not all come the same. Many Mi Lan Xiangs give you just honey and orchid flavor with nothing else special about it. But this one had a deep almond note in there as well as rich wood incense tones that made it obviously next-level.

I had two sessions with it, including one at walden pond. During that one, a little girl yelled, “look mommy, he’s having a tea party!” It made me pretty happy. I could think of few more magical places to drink tea. Circumstances aside, this tea has a lot of depth and yun.

My first gyokuro from O-cha, and so far the best. I’ve also had the suigyoku, the yame and the shirakawa, but they’re not nearly as good. I purchased it in August 2017 and finished it rather quickly.

What makes it stand out is its long-lasting electric sweetness; a sweetness that you can’t get to the bottom of. Some teas are nice and sweet for a bit, but the length of the sweetness here was notable. This taste balanced out the overwhelming umami so that they played off each other.

Tsurujirushi is so intense that whenever I shared it with a friend, they became stunned silent, almost confused. While drinking this tea, it’s impossible to have any other thoughts; it overloads the palate in a very arresting way.

Compared to other gyokuros, the yame is too one-dimensional umami and a bit astringent, the suigyoku was not vibrant enough for me, and the shirakawa was nice but more mellow.

Other reviews of this tea: http://theartofjapanesegreentea.com/tsurujirushi-gyokuro-tea-review/

This tea is so powerful it once made me feel like I was on a whole other existence. I consider all pu-erh.sk productions to have some sweetness, so it’s not like this is just a bitter bomb. The aftertaste is usually around ten minutes long. Lao man’e is not always that easy to find. This having the characteristics of older trees makes it interesting to have a tea that is extremely bitter, but not harsh. Anyone could get some young factory tea to be bitter but this is a different world. It’s got textured bitterness that evolves over time and one of my favorite intense qi profiles.

Other reviews of this tea: https://puerh.blog/teanotes/2018-lao-man-e-prsk

This was kind of a life-changing tea for me. It was the first nice raw I ever tried, and a good choice for that. It’s a really sweet tea with a bitter backbone, which provides for an awesome depth. It’s nice having your first qi experience along with that taste, very fun and happy. A couple years later, it still delivers pure joy.

In food science, there’s a term called the bliss point which usually refers to how much added sugar is the perfect amount to maximize pleasure. In this blend, the honey-pollen sweetness is just perfect, while you can still taste the woodiness, high florals and deeper richness. I’m on my third cake now, my first two purchased in early 2018 and the new one bought just recently in mid 2019. You can taste some aging on the new cake, where it’s a little deeper and less bright. It’s exciting to taste the transformation, but the peak time for this tea is six months to a year after pressing, and then probably many years later, depending on the storage. I would buy the 2018 to get an idea of that, or the 2017 if you want the original.

Other reviews of this tea: http://mattchasblog.blogspot.com/2017/09/why-this-tea-will-sell-out-first-2017.html

Hello from Tennessee! I’ve had a couple hundred teas or so in my life, so I thought it would be cool to reflect on which ones I enjoy(ed) the most. Comment with your top ten if you want. Doing this exercise taught me a lot about my personal taste, so it could be revealing to you also. All these teas are highly recommended!

The cheapest tea on the list. Cheap, but with a deep flavor that you only get after 7 years of Guangdong dry storage, no more, no less. The Dayi house taste is good, and it’s here. The range of flavors in the blend is very wide, and the amount of flavor (and caffeine) is wonderful. As long as I would not steep it for more than a second, the tea was not harsh. The smoke was well integrated, and I think this is a product of the storage. It makes me just as happy to drink as any expensive cake out there. Frequently, tea can surprise you.

Other reviews of this tea: https://steepster.com/pflipp/posts/360867

It’s a sencha that tastes like high mountain oolong. Significant throaty bitterness, spicy note, really deep qi, tea drunk feeling. Umami is absent here because there is no nitrogen fertilizer used. Goes nine steepings easily. Thanks to pedant for recommending this, it really made me realize that tea can absolutely surprise you. It’s not a novelty-only tea, as the dry potency of the tea is satisfying.

It’s unusual to find quite aggressively stored tea that still has power to it, but this tea has small traces of white mold and a dark liquor, and I can get it whenever. Supposedly from Kunming Factory (now closed), serious qi experience with very intense thickness and a sort of coffee throatiness occasionally. Very relaxing and energizing, it’s quite therapeutic to drink. Living tea is offering something here that is actually tough to get; quite decent quality leaves that are well-aged for an affordable price.

Now sold out, this brick has a very soft taste. It’s a really powerful tea that you have to be careful with. This tea is a favorite because it revealed how subtlety and power are not mutually exclusive. The malaysia storage isn’t really that wet, quite dry actually. If I didn’t know it was da xue shan, I would assume it was a Yiwu because of the sweetness. It’s subtle but it hits all areas of the mouth and has a full profile with some savoriness. Tastes much fancier than its price.