If I could give you any advice, don’t buy tea on Amazon. The people who do sell tea on Amazon do have some very helpful tips though:

“do not drink ten pounds of Pu’er tea”

Puerh tea has “many benefits”

Make sure your tea cake is “Grade:AAAAA+”

It “May good for burning fat and managing weight”

“Buy the brand name! Cheap Pu Erh are made from tea trees next highway and polluted land/air”

As we all know, “Dai nationality girl can sing and dance well and this product is also from their craft”

“This tea is 100% natural and organic without corrosion remover or pigment.”

As you can see, Amazon is a great place to learn about tea, even if it’s not a good place to buy it.

When I see veins on a puer tea leaf, I think “old arbor.” While I was drinking White2Tea’s Demon Slayer today, I noticed some particularly healthy-looking leaves. At 16 cents per gram, this is on the very low end of raw puer pricing these days. I wouldn’t expect to see old arbor material in this price range.

Huangpian means literally “yellow piece,” but I’m not seeing too much yellow here either. The w2t site says that huangpian refers to the larger leaves in puer production, also referred to as matured leaves in other places. I suppose it can mean one or the other.

With a huangpian cake, I guess you can get the cost down to really put some old tree material in there. For my taste, I might rather have this than plantation tea made with smaller leaves. It depends on the day though, because I also love this which is quite a bit cheaper and is all plantation tea.

I get much more relaxation and power from the Demon Slayer, probably because of those nice leaves which are very uncommon at this price point. The taste was great too. It seems very happy in my storage (a large enameled stock pot with a boveda pack).

Also, this session was with unglazed, wood-fired clay teaware made by Jiri Lang, which beats a gaiwan any day. This goes to show that memorable sessions do not belong to only the pricey teas.

Yesterday I hosted a gongfu session with my friend Joey. I had my whole six-hour music playlist set up, with my tea table moved to the middle of the rug. We started at 10:30 AM, sitting on little cushions. My mind was clear, I had plenty of water, and I knew this would be a great session. All of the teas were made with unmineralized filtered tap water, except for the Diangu which was made with Lurisia. We burned some nice incense from minorien.

We started off with this tea in a Novak pot. I used to structure my sessions from younger to older, but I thought this one would be great to start strong. It’s stimulating and heating and really gets straight to the point. Lots of activity in the throat. The sun was shining through the glass kettle making rainbows all over the tea table, so the session started off special.

Joey brought some maocha which he made in my jianshui pot. We got nice bitterness and huigan. It’s fun switching brewers; it demonstrates equanimity and it is nice to experience tea from both sides of the table.

I told joey that an aged ripe would probably put us all the way to sleep, but we found that it provided a very comfortable feeling. This tea was made in a glazed pot from teawarehouse. This was absolutely delicious.

After a lunch and music listening break, we made this in a gaiwan. This tea was purchased from Liquid Proust. We chose this tea because I knew it would be interesting. The furry leaves smelled like red tea to joey but it became apparent when brewing that it was not red tea at all. It’s a raw puer with intense florals (jasmine is most striking to me) and an energy that made us laugh.

This tea is no joke. Brewed in a small QSN yixing from tealifehk, one sip of this purportedly vintage loose puer and we were blasted into a new dimension. Joey said at this point that he felt like he was “a different element.” We could not stop cracking up. This is what a tea secrets party should be. We were not comfortable, but not uncomfortable, or maybe we were both. We got stomach aches from this tea and had to stop drinking. Could be because of over-wet storage. This concluded the five hour session.

Is tea something to consume, or are you trying to make it sing?

When you sit at your tea table, is it like sitting at the bar, or at the piano?

Are you distracted or do you focus deeply?

Does tea get in the way, or does it enhance your day?

Does tea isolate you, or bring you closer to people?

Do you drink your tea fast, or do you savor it?

Do you buy more tea than you can ever drink, or do you buy just enough?

Is your tea space messy or clean?

Do you taste what the vendor says you should taste, or what you taste?

Does tea make you anxious or calm?

Is tea boring or exciting?

The tea shop I work at stocks Global Tea Hut founder Wu De’s book “The Way of Tea.” Out of curiosity on a slow day I started reading the display copy behind the counter. Now before anyone says anything, this post is not about my opinion of Global Tea Hut. This post is rather about a specific quote in that book:

Master Rikyu said, “imagine your life without tea, and if it’s any different than it is now, you don’t understand tea.”

I actually can’t find any sources that contain this quote other than this book. Regardless of who said it, the idea is interesting to think about. If I imagine my life without tea, I would be yawning constantly. The time spent brewing tea would be spent doing something else… video games, music making, or hanging out with friends. Speaking of friends, I wouldn’t have any of my tea friends, and I would not work at a tea shop. So of course my life would be different! This seems trivial and must not be the actual meaning of the “quote.”

So what does it refer to? It does seem that my quality of life would be different, but just as fine. It is not necessary to drink tea to be happy. The point of the quote to me is that if you can’t apply what you have learned from tea to all aspects of life, you have not made the most of your tea practice. If you can do the dishes the same way you make tea, that would give you a happier life. The quote’s condition isn’t that you never had tea (of course you would not understand tea if you never had it), but that your privilege to have tea is taken away. Perhaps the essence of tea can remain when the actual tea is no longer present.

After all, it is not advised to have tea constantly all day. Most of our lives are spent without tea, although it can be in our system for a few hours after drinking. We should not be clinging to tea so tightly, and should be willing to let go of it: not by giving it away, but by letting it be.

I like young raw puer in unglazed clay. Specifically, I like it in jianshui clay because it brings out the sweetness. But ever more special to me is this european clay from teaware made by Jiri Lang.

I actually broke my pot recently, but I had a shibo from the same clay laying around so now I use that. The downside of this shibo is that it is very easy to burn your fingers on it. Here’s a picture. 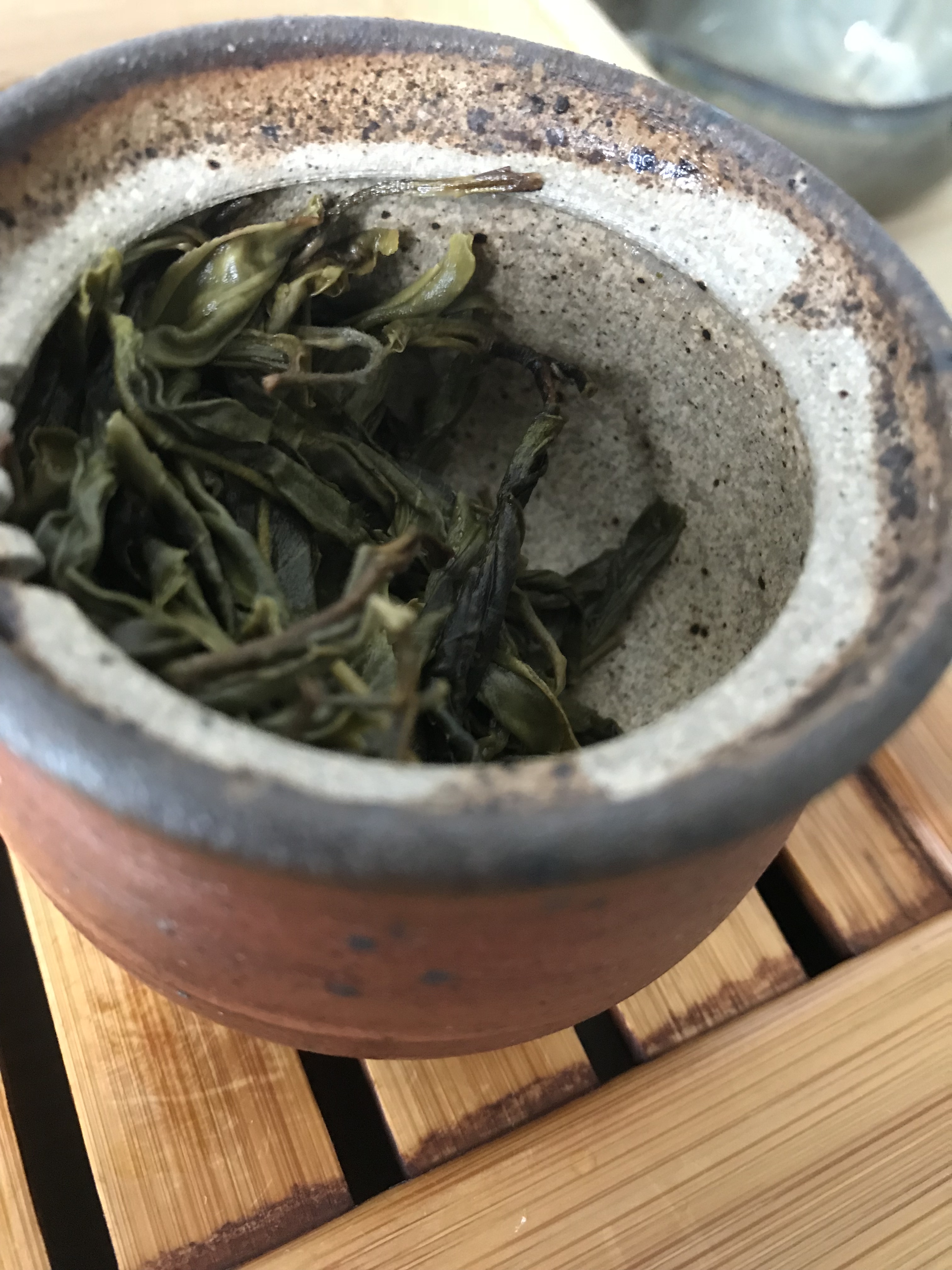 So what does it do to the tea that gaiwans don’t, or for that matter, yixing? Well, look at the inside clay. How does it look to you? Now how do you think it would affect the taste and texture and feeling of the tea? It makes the puer rocky, not by applying a rock taste, but by filtering the taste of the tea through microscopic pores in the clay to its own unique effect. I get a lot of throatiness from tea made in this shibo. But furthermore, it gives the session a different feeling emotionally. I like young raw puerh because there’s something tough and natural about drinking it; it’s strong stuff. My jianshui pot is very fun and cute, but this one is something else, almost reducing sweetness to bring out other subtleties.

With a gaiwan, you get the pure taste of the tea, but you miss out on this dimension.